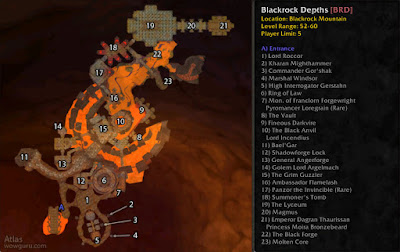 
The Limited Availability Option
Brewfest offers us the ability to queue for the seasonal Brewfest boss, Coren Direbrew, via the Looking For Dungeon queue.  Once the group is formed all party members are ported to Coren, who is located inside the Grim Guzzler Tavern within Blackrock Depths.  This will only be available through October 5th.  We can use this limited oppurtunity to get the most out of this option while it lasts.

Benefiting From Instant Ports
Now that we have a free port to inside The Grim Guzzler, we have the oppurtunity to farm some mass amounts of enchanting materials and runecloth very easily.  You do not need a shadowforge key either, since the port drops you deep within the dungeon already.  After the Brewfest boss is dead, just boot everyone from your Coren Direbrew group or wait until they all drop the group.  Many of the mobs inside the instance drop runecloth, so this is a good spot for farming runecloth also.  The instant port drops you right in the middle of one of the most heavily congested boss locations within the entire game.  Anyone selling enchants regularly will be looking for Large Brilliant Shards, especially since these are the main limiting material required for most of the BoA weapon enchants.  Many enchanters run Scholomance and Stratholme just for the Large Brilliant Shards to keep up with the demand of enchanting sales.  Lately I have turned to farming for them myself as the auction house prices have inflated to 20-25g per shard.  If you are not an enchanter, all you need is to have a friend or guild member (thats enchants) join your group.  This allows the disenchant option to appear on all dropped items, regardless of whether your enchanter friend is in the instance or not.

The Bosses
You will start off in the keg room of the Grim Guzzler.  Within the Grim Guzzler itself are located 4 bosses and a vendor to unload any vendor trash that you might pick up while inside this instance.  Win-win!  You can queue for Direbrew over and over without being limited by the 5 per hour per account restriction on dungeon entries.  There are a lot more bosses very close by and most can be reached without even having to aggro any of the trash mobs.  So by farming these bosses and any trash you may happen to aggro, you can easily collect a large number of Large Brilliant Shards, Runecloth, and Small Brilliant Shards (from the lower level bosses).  Any class can do this as these mobs are low enough level that you won't have any problems with survival.

The Best Route
I have tested this all during the hour I was on before work and have come up with the best route to take.  So the Brewfest boss is dead and everyone else is gone except for you (the enchanter).  You are in the keg room of the tavern.  Let's Begin:


Repeating This After Brewfest Ends
Another thing of note is that currently, when you log out in a dungeon, once you log back in you return to the entrance of the dungeon and the bosses respawn.  Since you entered via the keg room in the Grim Guzzler, this is where you will return once you log in.  We can assume that once the Brewfest holiday is over, you can do this very same farming route, if you were lucky enough to obtain a Direbrew's Remote from your holiday bag loot.  Just log out and return back to the keg room to start your route over again.
WoW Gold Tips by Cold at 6:51 AM