Flipping Blue Gear In The Early Weeks Of Mists of Pandaria

For the monthly Blogging Carnival at Cold's Gold Factory, I chose a topic on our launch strategies for Mists of Pandaria and asked the writers to look at their pre-MoP attack plan and discuss how it turned out.  This is my entry into that same carnival.  Be sure to check out the other entries on October 11th, 2012.

I have a fairly new character, a Worgen Warrior name Catness, on the Alliance side of my World of Warcraft realm.  She is my only Alliance character on the main account and her main job was originally to buy out cheap items and then transfer them over to the Horde side.  As Mists of Pandaria approached, I decided to start her on a career of flipping items within the Alliance auction house.  She was a bargain blues shopper, designated to just sit in the auction house and look for deals and steals that would be good items to flip.

At the end of an expansion there is always a flood of goods onto the auction house.  Gear is often posted for very cheap prices as players roll new alts during the end of expansion lull and start finding blue gear as they level or run dungeons.  Many times the seller has no clue of the real value of the item and therefore posts the items for very cheap.  That's where Catness came in.  I would use her pre-launch to build a nice stockpile of items that were dirt cheap and had potential for flipping for much higher, once Mists of Pandaria was actually released and live on the servers of WoW.

She found a ton of good deals.  Many items were posted for only a small fraction of what I knew they would sell for.  I specifically stocked up on as much leather based rare agility gear as I could find, in order to profit on the new Monk characters that would be shopping on the WoW auction house.

Catness bought and sold 90% of her items via the WoW Remote Auction House, which is now free.  Although I tried my best to get all of her gold and items actually collected in game, as opposed to with the Remote AH, so that they would all register within my TSM accounting or my MySales data, but I goofed somewhat.  You see anytime you buy an item on the Remote AH and flip it, you won't get any accounting data because your add-on never sees the transaction.  The same is true for collecting gold via the Remote AH function.  Anything collected there is excluded from your accounting module as well.  So the image below is missing a lot of the items, but it does give you a general idea of the kind of things I was targeting to flip.  I also did the same thing Horde side, but I'm only writing about Catness and her flipping for this article.

When you look at the image below, you can see some examples of the highly profitable item flips I've been working on since the launch of Mists of Pandaria.  As I've previously written about, the Blackwater Cutlass has been a huge seller since it is a great early level monk sword.  That data shows 12 bought and 22 sold, but is missing the 10 I bought for 2 gold.  Turning a 6 gold item into 76 gold is pretty easy profits on a minuscule investment.  While I have been crafting the Darkmoon Tarot Cards and Decks on my Horde Scribe, Catness was reduced to just buying the blue items themselves to flip.  Boy, did fools not know what they were doing when they were selling these for 8-30 gold prior to Mists of Pandaria.  Of course Catness gobbled those up and has been selling them from 150-225 gold each since the expansions start.

You see, flipping is all about know what something is really worth or knowing when it will see a spike in demand and therefore an accompanying spike in the sales price.  My background in leveling multiple alts, being a twink specialist Enchanter, and having twinked multple classes at multiple Battleground brackets has me very knowledgable about low level gear, choke points, and BiS twink items.  And anyone with half a brain should have known to hold on to leveling leather gear with Agility on it, but of course not everyone gets it.  4g Helms of Fire?  Thanks!  Sold em for 209 gold each.  5 Gold for Gloves of the Fang?  Easy money on Day 1 of MoP for 427 gold!  I was cherry picking a ton of blue crafted rings that players were selling for way too low as well.  Those have been bringing in some serious bank because I only stocked up on pure agility or agility hybrid jewelry. 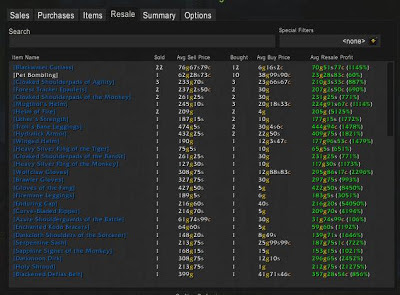 Once you know what to look for and what can be flipped for extra gold, you are able to repeat this same strategy yourself.  The only problem with a mass flipping strategy like this is that it can take a lot of bag and bank space since the items do not stack.  It's similar to flipping Transmogrification gear in that you need a ton of space and get a lot of returned expired auctions.  Just as with Transmogrification item selling, you must be patient.  These items have to be slowly unloaded over time.  Of course a lot of things sold quickly as the expansion launched, but they items will continue to sell because many players are playing their mains and will try out the new Monk class later.

I also was able to snatch up about 12 Books of Glyph Mastery for around 200 gold each that I was able to flip for huge profits at 800-1200 gold per book!  From the data that is shown below I made about 5k profit in the last 30 days with Catness.  I only started selling off the items once Mists of Pandaria launched and she's well into the profit levels already and she has only went through about 25% of what she bought to flip!  Items are continuing to sell daily, slowly but surely.


Q:  Why did I name her Catness?
A:  She's Alliance.  So I thought of the stupidest, lamest name I could think of and low and behold Catness the Worgen Warrior was born.

PS:  This is by no means all I've been doing since launch, but I wanted to feature something easily seperated from the rest of my gold-making strategies.