Selling Yourself And Other Pilgrim's Bounty Money Makers 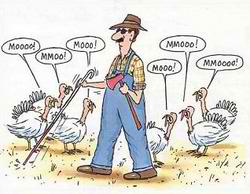 Pilgrim's Bounty
The World of Warcraft in-game holiday event Pilgrim's Bounty is finally here.  While this isn't the most profitable holiday, with a little creativity you can squeeze some nice chunks of gold out of the right people.  Have you thought of selling yourself off?

Rogue For Hire
The Pigrim's Bounty achievement Turkey Lurkey can be a real headache for players.  You have to find and shoot 8 rogues of various races with your Turkey Shooter.  These Turkey Shooters are a reward option from the daily quests.  The problem with the achievement is that some of the required races are not commonly created as rogue characters.  If you have a rogue then you can advertise that you will log in for a tip or a set price fee, which could allow someone the chance to complete their achievement.  Just like we sold wand zaps during Hallow's End, we can sell ourselves off this time to be shot and feathered into a turkey.  The 2 rarest forms of rogues are the Dwarf Rogues and Orc Rogues, followed by Undead Rogue.  If you have one of these you can probably find someone in trade chat who is offering to pay you to log in.  Take advantage of the easy gold.  I have charged up to 100g before to log in for someone.  You can also create a rogue for the same purpose as there isn't a level requirement for the character being shot.

Other Ideas For Pilgrim's Bounty
Here are a couple other ideas for making gold during Pilgrim's Bounty as we wait for the Cataclysm to arrive.
Remember that Amazon's Black Friday Deal Week starts today!
WoW Gold Tips by Cold at 6:01 AM