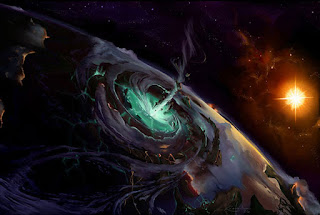 The Shattering 4.0.3a - Live this week
With the Shattering hitting live servers today for US and on Wednesday for the EU you’re going to need a plan. Not an escape plan or a how to not die in molten lava plan, a gold making plan. Strategy and preparation going into new occurrences in World of Warcraft will always put you at an edge over your competitors and today I’m going to talk to you about what I feel will be the best strategies for when the Shattering goes live.

Cue the Return of the Quitters
People have been returning at a steady rate after they ‘quit’ when Wrath of the Lich King entered its slump in entertainment, however with this patch comes most of the major changes that Cataclysm will make. I’m going to present a list of the important ones to you and show you what I feel will be the best way to make gold from them.

Re-rollers, Returners and Alts - I want to cast your mind back to 4.01 within the chaos of people wanting new gems, glyphs and enchants for the characters they may not have played since pre 4.01. Also in my opinion any BoE’s that you have, I recommend that you sell as people will be returning to their alts so they’re ready for Cataclysm as well as re-rollers on things such as Tauren Paladins and Priests, which I’m sure some people will be excited about and level them straight away.  Levelers need BoE’s and Heirloom enchants :)

All your Portals, they belong to the Mages again!
Portals Removed in Dalaran and Shattrath - This doesn’t seem like that big of a deal but it is. There are actually quite a few ways that you can make gold from this, either by sitting on a Mage in Dalaran and using a macro saying “Portals *name your price* - Unless you’d rather go to Borean Tundra”. There’s also the rather noticeable fact that without a portal hub and very little raiding occurring, there will be a lot less people in Northrend. Exploit this by farming something that you feel will sell well in Cataclysm (Saronite /Titanium for example) or even go enjoy the peace and quiet whilst you pick up Argent Tournament pets. Remember that with less people in Northrend the prices of the pets are bound to inflate, add arbitrage to that and these pets are a good time investment.

Profession Panic
With the expansion being so close expect to see two things, people panic selling and people panic buying. People who want the first few skill ups on their professions will be buying out items that will grab them those first few levels before the materials required becomes a lot more expensive. Be sure to capitalize upon this or be ready to when Cataclysm drops, make sure not to sell all your stock as the prices may rise exponentially in Cataclysm to meet the demand.

However, on the other side of the coin, be ready to buy as well as sell. People are bound to panic and be unprepared and sell the stock that they have acquired at potentially low prices. If this happens in a market you feel will be good for Cataclysm, do not list your items. Just take advantage of people’s idiocy and improve your stock.

The Final Countdown
The Monday before Cataclysm maintenance will be a good time to list certain items that will potentially sell the second that servers come up. This way you’re getting the edge over your less clever competitors as whilst your inventory is listed the second the expansion hits, they may be still preparing there’s for the first few hours after it goes live. A few examples of these are -


These are just a few examples, be creative and think about what might sell in volume on patch day and release day and use it to your advantage.

This post was brought to you by Sykez from JustAnotherGoblin.com and I’d like to thank Cold for allowing me to post here at Cold's Gold Factory.


*************
Sykez has been on hiatus to Starcraft 2 lately, but has returned this week and is back into blogging about World of Warcraft and gold making strategies.  Head on over to his site and check it out.  Welcome back , Sykez!    - Cold
Image taken from http://phoniamaguk.files.wordpress.com
WoW Gold Tips by Cold at 6:01 AM