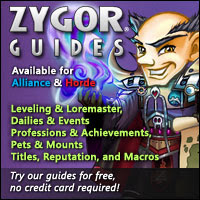 Today, Zygor Guides launched their brand new strategy guide for Diablo III.  There are many Diablo 3 Scam Guides on the market already that have been claiming to be masters of Diablo III for months now, when the game isn't even out yet.  The Diablo III Zygor Guide is the only honest and trustworthy guide that I have seen so far.  All of the other Diablo 3 guides have already been on sale for weeks or months and have already been claiming to be masters of the auction house, leveling, and PvP.  The RMAH and PvP aren't even making it into the release version of the game until later dates!  All of these other scam guides have been selling for weeks based on lies.  Zygor Guides has not been engaging in any of these devious and misleading behaviors.  The have just released the Zygor D3 guide and tell you the truth up front:
Remember, no other Diablo 3 guide seller has been even close to honest with their buyers.  Only Zygor Guides could be trusted prior to the Diablo 3 release date launch and I wouldn't trust any other guide after Diablo 3 launches either.  Their proven track record in World of Warcraft will translate over to just as great of a product and customer service in their Diablo 3 guide.  they are even asking for your input as the finish the guide, so that they are building a guide based off of what the readers want.  Yes! Zygor Rocks!

"Customers who order will receive instant access to an early sneak peek of our Diablo III guide, which consists of a partial walk through of Act I as well as beginners guides for all the major aspects of the game. This was the only content available before the game's release. Upon the official release of Diablo III, these guides will be updated daily with a complete full game walk through (Act I-IV) and expanded guide content for crafting, classes, skill optimization, the followers system, and achievements, until the full game is covered in the same fashion as this sneak peek version."

To celebrate the launch of the new Diablo III Zygor Guide, they are having a crazy sale, which includes a discount for previous guide buyers.  Here is a quick summary of their sale:
I told you this sale is crazy!


Who else loves their Zygor Guide?  Please share your Zygor testimonials in the comments.
WoW Gold Tips by Cold at 4:31 PM