Super Special Gaming Savings Alert
Amazon.com is offering an Amazing Sale on all Digital Downloads of All Core Games!
This Weekend Only you can save 20% off the price.
So save 20%, No Tax (most states), No Shipping Charge - Now's the time to buy!
This awesome sale only lasts through this weekend so ACT NOW and SAVE BIG!
20% Off All Core Game Downloads at Amazon.com
(Please use my Affiliate Link so I can continue to run free giveaways and contests)
Save 20% on Action Games, Roleplaying Games, Simulation Games, etc.
Save 50% on Total War Games
Some of the great games currently available and 20% off:
Hundreds More to Choose From
﻿
******************************

JMTC READERS:  Markco of JMTC is a liar.  He is blatantly making false accusation and spreading lies about me.  Why?  Because I caught him ripping people off and told the world and now he's hellbent on getting revenge.
No cookie stuffing was attempted on this post.  It's an outright lie.  He'll show ya screenshot of a little white box behind the above link.  So what?  That's a simple copy/paste coding error.
All I did was try to use the link builder from within the site stripe of Amazon.com (see below pics.)  Its a simple copy paste error that was live for about an hour before I caught it and took it down.  Amazon uses iframes to create adds with links and pics.  I copied and pasted the Amazon created code, but something didn't copy correctly, thus resulting in broken code which displayed as a little white box.
I fixed the link and made it from scratch the old fashioned way, since the Amazon created code was goofy.
Check the pics below, its the same style of coding I originally tried on this post that resulted in the little white box from the broken code.
Anyone who has tried the site stripe function at Amazon.com knows how wonky it is.  Markco is an idiot and was just looking for someone to blame for his own stupidity getting his paypal account hacked.  Didn't have a damn thing to do with my site.
Funny thing is anyone who knows the Amazon affiliate program, knows that Amazon only gives a 24 hour cookie!  That the worst part of the Amazon program - 24 hour cookies suck because if they don't buy from the original clickthrough (maybe they were just browsing and buy later) then odds are you aren't getting credit.
Serious black hat SEOs that actually do cookie stuffing, want to stuff the programs with the 30, 60, or 90 day cookies.  Not a friggin 24 hour Amazon cookie.  That's worthless to them.
Just another one of the ways that Markco's lies can be debunked, whereas my claims against Markco of JMTC all have proof, documentation, and 3rd party involvement. 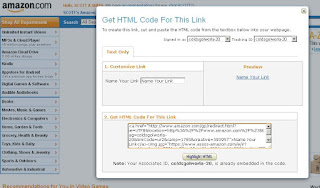