Passive Income is possible from the Guild Perk Cash Flow, which is available at Guild Level 5.  Anaalius of Anaalius.com recently posted about the possibilities of Passive Gold Making and the Cash Flow Perk.  A couple of weeks into Cataclysm, I decided to give this a shot of my own.

I already am the guildmaster of many guild banks.  On my main character I invited a bunch of random level characters to my guild in an experiment to see if I could get others to level my main guild up without actually running it like a guild.  I want guild perks, but I don't want to be tied to a real guild with any type of duties or expectations.  I created the guild for using other players to advance my guild level, while also taking advatnage of the various guild perks that come with leveling a guild.

The guild is nothing but a place for leveling and alternate characters to benefit from guild perks while leveling.  There are no guild officers.  No one is allowed to even see what's in the guild bank, much less withdraw from it.  Everyone is free to invite.  Everyone is free to leave the guild at will.  We do nothing together as a guild.  We are a bunch of solo-ers that are leveling the guild for perks.  I invite people at random and use a Guild Invite All Macro to speed the process.

How I Do Guild Invites: 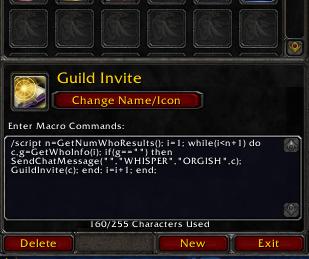 This code is for Horde characters.  Alliance players need to change ORGISH to COMMON in the macro code.

This code makes forming your guild of random people (who are going to be raising your guild level, earning you guild perks, and depositing a percentage of all their looted coin into your guild bank) rather painless.  Patch 4.1 notes have even been updated to state that the guild % coin looted report will be removed from the display.  Soon people won't even know that they are helping fund the guild bank.

As long as you are up front and honest about what you are doing, you shouldn't get many complainers.  If you do get some whiners, a guild kick is an easy solution.

Cash Flow Rank 2 is available at Guild Level 16.  That's  going to be a long ways away seeing as we have barely cleared Guild Level 5.  Regardless, Rank 1 is providing free easy gold within my coffers.

Do You Have A Guild Working For You Or Are You Just Working For Someone Else?
WoW Gold Tips by Cold at 3:01 AM