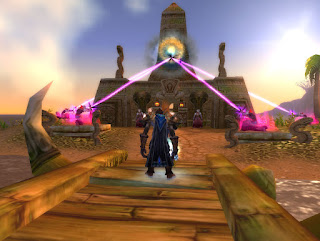 Banish Da Heart of Hakkar Mon!
Had a lot of time on my hands yesterday, so I decided to start on a project of farming Zul'Gurub solo.  I killed every boss, except for the Madness boss as I'm not an alchemist on Cold.  Basically what I am doing is gathering Bijous and Coins to send off to my priest so she can get to exhaulted to get the recipe for Living Action Potion, as well as the other recipes.  In the process, I got the Tome of Polymorph: Turtle (from fishing up the underwater boss Gahz'Ranka, lots of BoE blues that I will save until Cataclysm to sell to levellers, tons of greens to send to my enchanter to disenchant, Bijous and Coins Galore (using on alts, not selling), the Heart of Hakkar (banishing it in the above pic) for the Quest credit, around 1k gold from vendored trash and BoPs, an ass-ton of Runecloth (saving for Cata), oddball raw materials, and a bunch of stacks of Thorium Ore.  It took me about 5 hours total, not counting the 30 minute hiatus for the Stranglethorn Fishing Derby (got beat by 7 tastyfish, but did get the rare fish to add and extra +5 fishing from the high test line to my Ku'luak Pole - yay!).  Took me a long time because I was farming trash mobs over and over after respawns, just trying to get more loot and a chance at the raptor pet (fail).  Neither of the rare mounts dropped either.  Was an absolute blast to solo the entire thing.  Why is Jin'do the Hexxer harder than Hakkar?  Lots of gold to be made in ZG, if you are looking for something new to try.  Especially if you are not using the coins and bijous and are just going to sell them outright.

Also be sure to Check out my Guest Post over at Markco's site, JMTC.  Be sure to leave some comments over there too.  Thanks all!
WoW Gold Tips by Cold at 8:50 AM