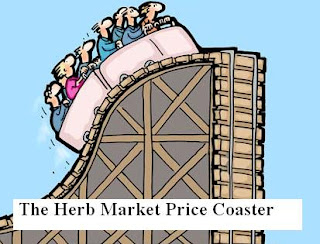 Herbs Are Down and Ores Are Up

With the scare of the coming change to the vendorable price of the cut uncommon Cataclysm gems, many of the botters have already switched away from the bot farming of Obsidium Ore.  A lot of servers are already seeing a shortage of Obsidium Ore as well as a flooding of herbs on the Auction House.  It is obvious that the botters have switched from farming Obsidium Ore.  Some have even gone to gathering Elementium Ore, while the majority have switched to the bot farming of herbs.

Obsidium Ore is even on shortage and selling for a higher rate due to the lack of supply.  Herbs of all kinds are dropping in price as the markets are getting flooded.  Expect this to only get worse once Patch 4.1 drops if it includes the data-mined change to the prices of cut gems.

What Does This Mean?

Some players are in a frantic rush to prospect their Obsidium Ores, cut the uncommon gems, and vendor them for 9g each before the price could drop to 75 silver each.  Instead of dumping your ores to the vendor via gems, you might be better off selling the stacks on the auction house now that the prices has risen.

As far as herbs go, liquidate any products you have ASAP that were created from herb derived materials.  The value is going to plummet as other players start to be able to get herbs for far cheaper and in much larger supplies than prior to the big botting switch overs.  Mysterious Fortune Cards, Adventurer's Journals, Glyphs, Potions, Flasks & Elixirs are all going to tank, so dump all that you have pre-crafted before you are unable to sell them for close to what costs you already have sunk into them.  You will be able to craft these all for much cheaper than previously due to the flood of herbs.