Gifts For Gamers: Fluxx , Fluxx The Board Game, & Other Looney Labs Games


FLUXX is one of my favorite family friendly table-top card games and I've featured it in an earlier Gifts For Gamers post on my Top 5 Table-Top Card Games.  Fluxx is an awesome card game because it is super fun, easy to learn, appeals to gamers of all different types, and can be played by the whole family.  Fluxx is a game of ever changing rules, which keeps the games feeling fresh and makes the entire Fluxx line have a nice replay value for years.  There is a version of Fluxx made for everyone: 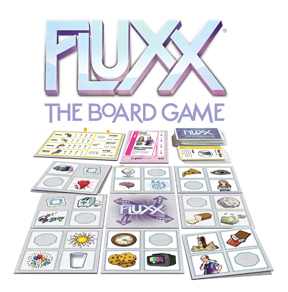 And now Looney Labs has just released the first ever FLUXX Board Game, which looks to be a ton of fun too!  Check out the video below for a preview on the new Fluxx board game.


The board game that's all about change: changing rules, changing goals and now changing tiles. Occupy the right tile spaces to claim the current goal and reveal the next goal. getting you one step closer to victory.

It's more strategic than the original card game and delivers everything you'd expect from a name like Fluxx; The Board Game.The ever-shifting landscape is made of tiles that can be rotated or uprooted elsewhere on the table.Ti win, players must position their pieces on places shown on goal cards.Victory requires accomplishing several goals but the exact number needed is subject to change!Rule changes are tracked on a comprehensive new game board.It's a game about change where everything can change - from the rules to the gameboard to the color of your pieces!


Other Fun Games From Looney Labs

Looney Labs creatures a large variety of really fun games.  I've played a lot of their games and have enjoyed every game of theirs that I've played.  Andy Looney and his wife are both super cool and friendly people who I met at one of the Origins Conventions.  Any convention that I've been to I always look for the Looney Labs room to hang out and try out their new games.  I recommend the same, if you are lucky enough to attend a gaming convention where Looney Labs is attending also.

Here are a few more of their games that you may be interested in checking out.