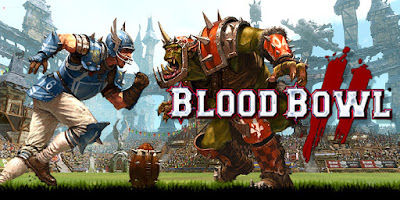 One of my favorite games to play lately has been the newest release of Games Workshop's classic board game, Blood Bowl. Mixing elements of American Football with fantasy races from the Warhammer Universe, Blood Bowl 2 brings a smashing good time to the PC or various consoles. 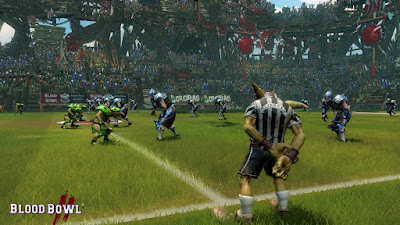 Blood Bowl 2 is a strategy game adapted from the popular board game of the same name. This is not your run of the mill Madden style action football game. This is a strategy game adapted to PC and console, so you are going to have to use your brain much more than your reflexes. The game is an absolute blast! Imagine a no rules, no holds barred, in your face beatdown game of football where your players are always at risk of hurting themselves, getting injured, or even suffering a fatal blow that will send them to the graveyard for good! Your players are always at risk of injury or death, but so are your opponents players. There is always a sense of danger with every play you make or every hit that you take. That's what makes the game so much fun! Murdering other players right there on the pitch is an absolute blast!  Having an enemy player make a break away play to get just shy of the end zone, only to end his career as a smear of blood on the goal line is just so much fun! Some games get so bloody that one side may lose most of their team before the match ends.

What Races Can We Play In Blood Bowl 2?


There are currently 8 races in the Blood Bowl 2 base game:

There are currently 2 additional teams available as DLC:

There are 4 teams coming soon and free for anyone who owns the game before they are released: (Buy soon!) 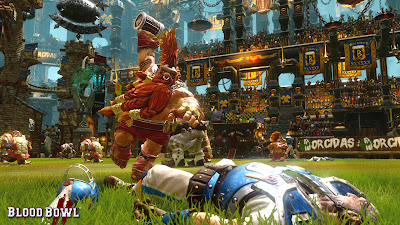 Are You Ready To Smash Face?


I can't recommend Blood Bowl 2 enough! It is an awesome game that is a ton of fun with an added element of risk with every die roll. You create your own team based off of one of the races and your players level up as they score touchdowns, make passes, hurt and injure others, kill enemy players, and earn MVP titles for each match. As your players level up you are allowed to pick new skills for them to learn as they become better all around players. Skills like Block, Mighty Blow, Sure Hands, Thick Skull, Diving Tackle, Leap, and more are available to turn your team into even better footballers.

Ideally I would like to get about 10 to 12 players together on PC (via Steam) to start a private league where we play each other team a couple times per season and pass a travelling trophy on to the seasons winner. So if you are interested in playing in a private league with me and others that read this blog or follow me on twitter, be sure to get a hold of me via email or on twitter (SSmith0911) so I can add you to the list.

Where To Buy Blood Bowl 2?

Find out more about Blood Bowl at the Official Site.

I Hope To See (Kill) You On The Pitch!